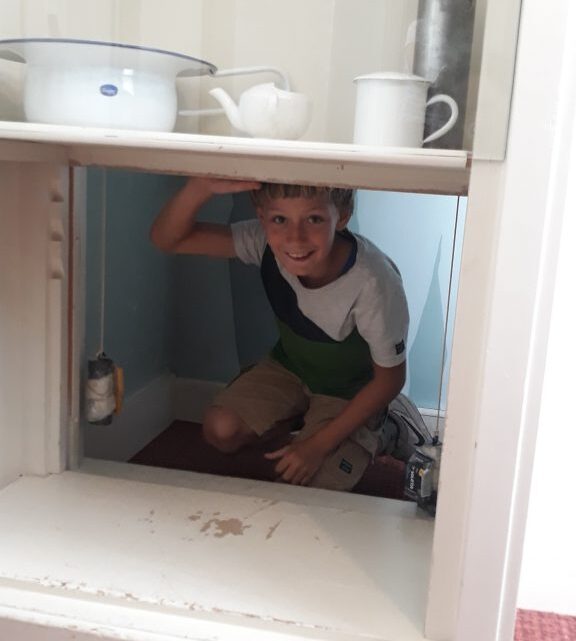 A trip to the world of Corrie Ten Boom

Since we are not able to travel these weeks, I’ll take you along a trip to the world of Corrie ten Boom.

In 1844 the grandfather of Corrie started a prayer group in the Barteljorisstraat. He had it in his heart to pray for the Jews.

In 1944 the Gestapo came to the House of the family Ten Boom and arrested Father ten Boom, Corrie, and her sister Betsie.

The six Jewish people who were hiding in the Hidingplace were not found.

Corrie was a tidy, energetic watchmaker from the Barteljorisstraat in Haarlem. They were a smart, nimble family who was used to working closely together. They had been doing it for years in the watchmaker’s shop in Barteljorisstraat, demonstrating hospitality, persistence, hard work, and a down-to-earth outlook on life. They saw a clear distinction between good and evil. Things were not too bad to disturb their sense of humor. They took risks, even of their lives. These are the things that characterized this family. Corrie’s father was on the school board in Haarlem and destroyed forms that revealed the Jewish identity of children. He was a troublemaker for the German regime.

He didn’t get his dry, resolute humor and solid faith from a stranger, either. His grandfather had founded a prayer group in 1844 for the beloved people of God: the Jews. For 100 years, a prayer movement had taken place on Barteljorisstraat in the house of the ten Boom family. 100 years later, the Gestapo came to pick up their father, Betsie, and Corrie. The Jews—who had been prayed over for 100 years—and two resistance fighters were hidden in “De Schuilplaats“. They fled…

We have here an old book from 1946, written by Corrie when she had just gotten back from the camp. It is called God’s Prisoner. If I have understood correctly (let me know if I’m wrong), this is a predecessor of The Hidingplace/De Schuilplaats. Writing to process circumstances may also have been very healing for Corrie. In that booklet, Corrie describes somewhere a situation revealing the darkness of the camp and the perseverance that is possible when one holds fast to living life as normal: Betsie sits at the window repairing her stockings by the light that comes through the window. At night, it often happened that three or four people rolled from the bunks to the floor, and they died there on that dirt floor because they did not have any strength left.

And Betsie is sitting there repairing her stockings at the window.

But it was precisely that tenacity and self-respect to keep doing the right thing that struck me when I read it. In prison, Corrie was able to see the bigger perspective. She continued to seek people, lost courage herself, but also held on.

We are in the middle of the Advent season, the dark weeks before Christmas are here. We are still in the middle of the pandemic. It’s far from over yet. We, here in the Netherlands are just in another 5 weeks hard lock-down. I hope that we get the courage to see our situation from a larger perspective.

Anyone can do the right thing. Or at least, try.

Corrie and her family were betrayed by an NSB Dutchman and later helped in captivity by a German who tried as much as possible to do the right thing in his power.

Father ten Boom did not judge. He did not judge the Germans, and he did not judge fellow countrymen. “Leave that to God” was his wise advice. The power of the small individual can have far-reaching consequences.

Here is a film about their story

Film about the hiding place (with Corrie ten Boom, an old movie which gives an accurate description of the period.)

Song: You Are My Hiding Place

If you ever consider paying a visit to the Netherlands, Haarlem, the Corrie ten Boom house and the church the St. Bavo are Must Sees.

I’ll make you a coffee when you are in the neighborhood. And, well—Haarlem is 100 kilometers’ drive from our kitchen table. So, you might even want to borrow a bike here or there and enjoy a tour through the Dutch landscape! 😉 Keep dreaming till the lock-down is over.