We have met so many lovely people over the years, and last Friday, twenty of them were visible on one single screen! We were honestly overwhelmed to see such clear evidence of how God has blessed our relationships. Thank you all for making time and joining us at this online table. It was precious to us to see so many familiar faces, some of whom we had not seen in a long time.

For those of you who were not present: On the 20th of November, we had an online book presentation. Sadly, we forgot to record it! Alas! Sometimes, life can be seen as a challenge to conquer disappointments, so I will make the most of it and share with you some highlights as I don’t mind writing. 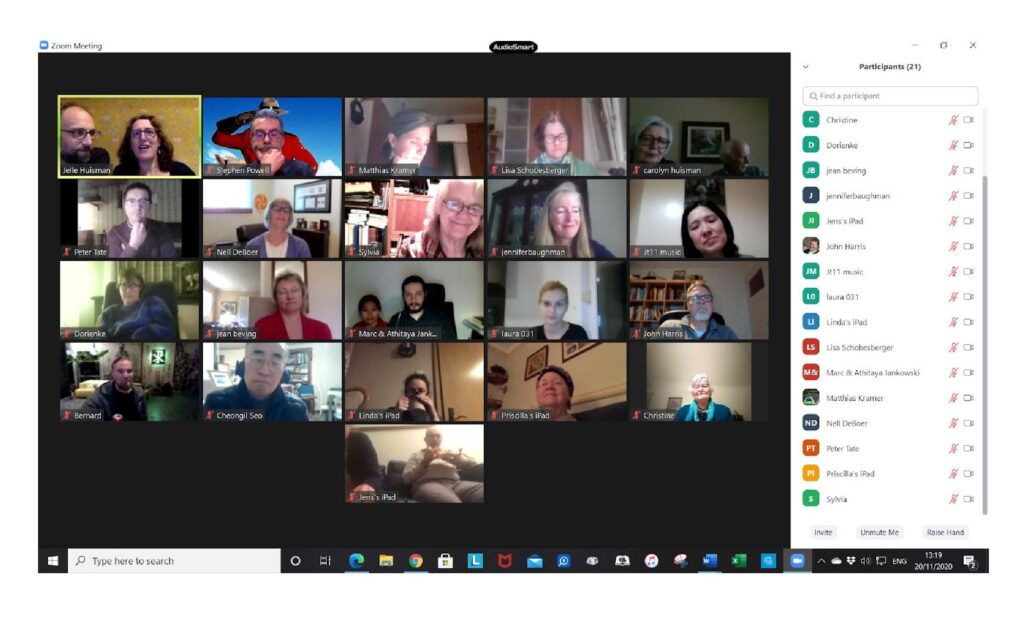 The group of people who were present gave a nice indication of the trail we traveled during our nomadic lifestyle over the last fifteen years.

Present were friends from Canada, the United States, the United Kingdom, Ireland, Germany, Croatia, Austria, Switzerland, and the Netherlands.

A dream from the Wycliffe Mama, Maria Hammond.

I read one chapter, so I’ll just do it this way now:

Why did you make the jump from blog to book?

I just realized how scattered and thin the internet is. Stories get lost. That is such a shame! Stories need to be retold and rediscovered over and over again so we do not forget their wonder and beauty. As I write this, I am reminded of Psalm 78. In a nutshell, tell God’s stories time and again. The book is just another way to present stories of how God is at work in our lives. Despite the ups and downs, through it all, we can see God’s fingerprints. I hope it is an encouragement for those who are interviewed that their stories (often hidden stories and silent voices) are heard. And that is also an encouragement for all readers! Capturing these stories has not only helped me to see God’s handwriting on our lives but has also made me live more attentively. The careful reader discovers multiple layers.

Peter Tate asked: What have you learned about your own “Dutch-ness” through working with other cultures that you weren’t aware of before?

First of all: Croatia is in Europe. We felt like European citizens who just moved to the far most corner of Europe—1600 km to the south. Maybe this is also already an answer to the question of how our own “Dutch-ness” worked. We are unbelievably stubborn in bridge-building and seeking common ground. We are even more aware of it now. Dutch people (and I am even worse as an extrovert) can be confrontational. There was a funny example of this during the Zoom meeting: I suddenly asked somebody who preferred not to talk to answer a question for me, with that overwhelming her. We joked about it and moved on. But I thought to myself, “I did it again!”

Are there things that you have come to admire in any other cultures that your own Dutch culture doesn’t do (or isn’t as good at)?

Hospitality reaches far further than we are used to in the “cold culture” of Northern Europe. We also call ourselves hospitable. Who does not want to be hospitable? But the Croatian culture is better at it. I visited Marcela, a professor, in her office, and the first thing she does is open a cupboard and offer me chocolate and one or another kind of alcoholic drink, and it was only midday. This is unheard of in our culture. The chapter entitled “The Sound of Music” also reveals an interesting perspective on hospitality.

John Harris asked, Are there things that you learned about your own personality in living cross-culturally?

I’m afraid the answer I gave that night was not very clear. And I am glad that I have had a bit more time to think about it. The answer is: Yes. I learned a few things. I became more and more aware of the need for contemplation and retreat from daily life—especially when you live between cultures. It takes more time to transition and live fully in your new (third) culture, in which both cultures combine within your single life. That needs processing and adjusting. I do not naturally gravitate towards quiet and calm. But Jelle does. I am an outgoing, connecting one, and he is the one who brings calmness. By organizing retreats, I have challenged myself to get out of my comfort zone. But I came to love it enormously and benefit greatly from it. My writing is better if I let it brew for a bit. A bit of pondering is good for the soul. But when you are in charge of a retreat, that is not a very calm position to be in. However, in Hungary, the journey was 500 km each way. I remember stopping sometimes at a petrol station along the road from Budapest to Osijek just to write a few things down in my journal.

Bernhard Wagner asked: How did you decide on which chapters to include?

Jelle and I did it together, and it didn’t take us long. While writing and editing, we added a few more. At a certain point, you decide and live with that choice. But I had a hard time torturing myself over what else I should have added. I did not add any story about the refugees, while that also had quite some impact. We did the publishing ourselves, so we did not have somebody guiding us through the process. I asked a few proof-readers, but I am sure that the book would have looked different if I had had a writing coach. I am fine with it though. My goal for this book is that you feel God’s heartbeat within it. If you can hear that, I am more than satisfied.

And: When do you write?

I have an urge to write. Flannery O’Connor says, “I write because I don’t know what I think until I read what I say.”  This is very true for me. I have three stages of writing: 1. The idea, 2. the first draft, and 3.“ready to publish”. I see writing as work. An idea can pop up while I am waiting for the soup to boil. But the second part needs a few hours of concentration without distraction. All three parts are beautiful in themselves. I love the creative process. It is like watching something that was submerged underwater coming to the surface. It is the same as what I am writing now. The input came from the other night. When we found out that we forgot the recording, I decided to write about it. I took some time off on Saturday to write. In the meantime, I realized how fun it is to write about the process of writing! But I am just a self-trained writer at heart—non-educated or self-educated with a love for writing. It is good to have a writing routine. I love the way C.S. Lewis organized his day. But, I have to adjust to our family life and have the best hours in the morning while everybody is at school.

Jens Meijer asked which language I wrote in, and we talked about the fact that I often write in English. I do not know why. Maybe because the English language has a wider vocabulary? Or, it is just because I learned the language in my thirties? (Yes, pretty late) I also switch between drafts and languages, and that also helps me to play with words. It was an interesting conversation about what happens in your brain when you are bilingual and your second language becomes as close as your mother tongue.

Liza Schobesburger said: I do not read a lot about your retreats? Why not?

Yes, that’s true, and now I am thinking: I should write a whole booklet about it—the why’s and how’s of a retreat. We actually put it in the first draft of the book. At a certain point, I was afraid that it was too much about me, so I took it out. It might have been the wrong decision. I will probably write more on it later.

Jennifer asked: In your book, you talk about how it was for you, but how was it for your children?

That is a very good question. We talked a bit about it, but we are also aware that this is a very sensitive point, the discussion of which could easily fill an evening. Maybe we will do that sometime—with two rules: what is said in the group stays in the group, and no recordings! It seems like a good policy after all.

Laura said the next day: “It was so cozy.” I agree. It’s funny how coziness can even be transmitted through a laptop. But I know it is the former connection that made this coziness possible.

Isn’t it amazing that although some of us have barely met, or met a long time ago, we still feel this connection and the freedom to have these kinds of conversations. Maybe we’ll do it again at some point in one or another way.

Thank you for attending and taking your time! I feel very blessed.

Haven’t ordered the book yet but are willing to do so? More about the book: Theworldaroundmytable.com/book

Or for ordering it directly, click on this link: Order now on Amazon

I’d love to send you a card/bookmark for the book. Please reply and let me know your address: