The moon is full and shines through my six-person coupe. I settled in for the night. It is dark outside and we see one station after the other. Travel is not unknown to me. Traveling alone is all the more unknown.

I orientated myself a bit about the course of the night: Departure Den Bosch, Netherlands: 20.12, We stop in Bonn, Koblenz, Frankfurt, Würzburg, Nürnberg, Regensburg, Passau, Linz. (where I stop to visit friend, Lisa Schobesburger) Vienna.

It was twenty years ago, on a full moon night, that Jelle and I became parents for the first time, in a part of a farmhouse in Houten, near Utrecht. Marijke was born that night. This is the reason that I take the night train to Vienna. Now I’m going to celebrate that with her in Trumau, where she studies. A village next to Traiskirchen and about thirty kilometers south of Vienna, Austria.

At full moon Jelle and I often said to each other, “Psalm 72 hangs in the air.” We wrote on her birth announcement: “They will fear You, as long as the sun and the moon are there, from generation to generation.”

There it is hanging again: That moon. And Full it is. It adorns the sky and lights up my train cabin, and that psalm hangs on it like a sure promise Pendulum. At the last minute I threw our garland that I sewed in Horsley’s Green in 2007 into my suitcase. The vague suspicion was born around that time that our House would not be set in stone. We might be long term sojourners. Wherever we celebrated. The garland was there. He’s there.

The people from the theater in Mariupol that were shot at last night are just on my mind. I try to shut myself off from the news.

The sun shines on the square in front of the station. Somebody plays the trombone and others are dancing freely to it. Roma cling to me to sell their wares. Drifters fill the nooks and crannies of the station. Buses run to and fro. The birds fly high in the sky. And the sky is so blue. So blue. How far can a bird see? What do they see of the war that rages five hundred kilometers away? Or are the birds also fleeing?

“Lord! Have mercy to the leaders. Give wisdom to the leaders to make the right decisions. Let this war end! And soon! What must we do!? Let Zelensky stay strong. Give strength oh Lord! Let attacks be thwarted. Let refugees find peace. Let the people in the bomb shelters get strenght more than we can imagine. O God! Think of the babies, the pregnant women, the mothers, the boys in battle. Everyone, every single one of these millions of people.“

A mother presses something precious into her son’s hand. He looks at it, straightens his beret. They say goodbye. He joins the army. She stays behind. He has youth in his eyes.

Marijke picks me up and it’s great to see each other again! The sun is stronger here in central Europe than in the Northern Netherlands where we come from. We have lunch together. Outside I hear Ukrainian children’s voices. They play uninhibitedly, their mother has found a safe shelter here. Father stayed behind. At war.

Marijke is working on an essay about Bonhoeffer and Franz Jagenstrater. The film about Frans” life was shown in cinemas in 2020 and made a deep impression on both of us. The theme is: War and decision. Two years ago I read “Wedding letters from the cell“. How hard was it then to imagine Berlin being bombed. How happy I was that this is over and history is far away. Shockingly I realize I would read the letters very differently now. It’s a different time. Putin deployed supersonic weapons for the first time last night. It seems to be his death march. His Life’s Work.

Today is Marijke’s birthday and we are both so happy! She sits in her chair in front of me unwrapping presents and mail and love and whatever else rolled out of my suitcase that has been put together with care by so many hands. At 10.00 there is Liturgy. We walk to the chapel, the warmth and smell of incense meet us as soon as we enter the old vaulted corridor of the castle. The icons line the walls and the people fill the space. Word and Prayer connect time and people. There is a deep peace.

“We love our home, and God’s Home, the Church and the deepest experience of the Church is that of a Home. Always the same and above anything life itself – the liturgy. Evening, morning, a feast and not an activity.” A. Schmemann.

We eat, celebrate and meet incessantly these three days. I get a glimpse into her life, the table conversations, her classmates, her teachers. Satisfied I start three days later on the journey home. 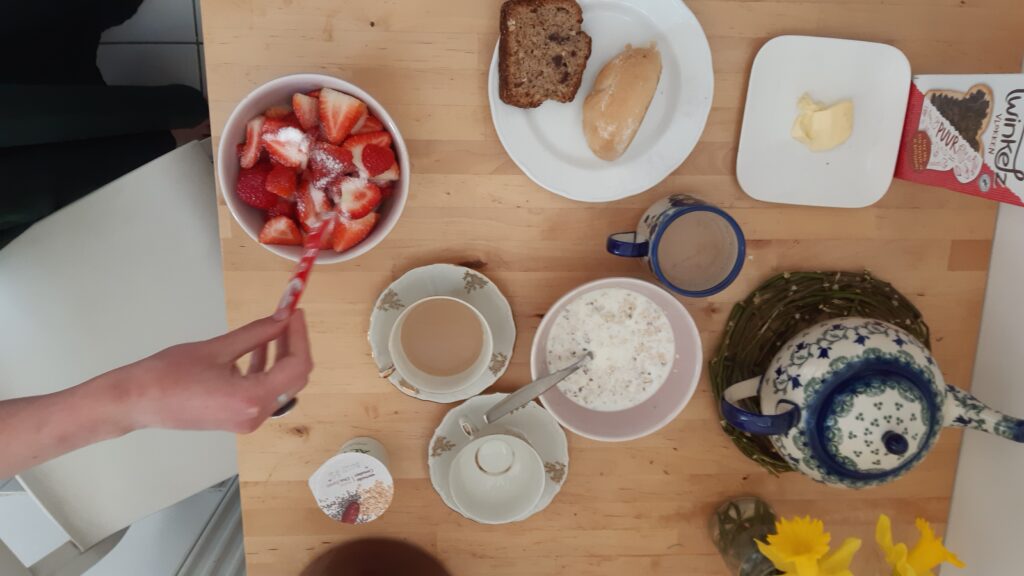 The child is about eight years old and carefully carries her bunny in a cage. Her brother has carefully tucked the water spout into a side pocket of his backpack. They hop down the escalator. Mother and the rest of the family walk after them with their household goods minimize to a few bags. The refugees are addressed in Ukrainian by people from Charitas and shown the way. An entire wing of the big Vienna station is theirs, but if you don’t want to see it, you can skip it.

Shopping carts full of necessities are ready: diapers, water, juice and soup. There is a corner for coloring. But sleeping is done in a chair. Two brothers hang there head-to-head. They wear the same kind of jacket. Brother has no place to lay his head. The head rests on a chair back as a temporary residence. Mother stands robustly next to it. No time for melancholy. I swallow, want to address them encouragingly, but realize that we do not speak the same language, go ahead and jump on my train.

This time, I share my train cabin with two other women. Together we lived in more than ten countries. One is on its way to a job interview in Leiden, Netherlands and the other works for a refugee organization. We are talking about night trains, Zagreb, Istanbul, Sarajevo, Budapest, Belgrade, Venice. Anno 2022. War in Ukraine, refugees, the aftermath of a war.

Who Would Have Thought What We See Unfolding Before Our Eyes These Days!

It seems as if the dusk in the train deepens our conversation. I’m enjoying it thoroughly. The most experienced night train traveler (The German Lady) says just before closing her eyes: “Oh, recently they had some trouble with these trains. Several times somebody started a fire in the curtains. Oh well, maybe not the best comment before we are going to sleep.” She closes her eyes and disappears into the silence of the night and the high angle diagonally across from my bed.

The less full moon peeps through the curtain, the train slows down and we roll into Passau. The train is connected to the night train from Innsbruck. I try not to think about the other cabins and whether someone might start a fire. It works.

The changing landscape glides past my window. The conversations have fallen silent. Not the sound of the booming train. I regularly lift the curtain, I can’t just miss such a wonderful trip!

“Conscious living” I think with a chuckle, but sleeping wouldn’t be a bad idea either. The houses are getting tighter and smaller and I know that we are in the Netherlands. Fourteen hours later I get out. Just a little while from Utrecht to Ede. The last train before I am home.

Now, if you find unexpected encounters, street observation, strange women and a bit of discomfort charming, if you like green travel overland and are not afraid to pay more than for a plane ticket, then the night train is highly recommended!

What would you prefer?