How is it for a Mission Kid, to live in a family that is moving around? Just thought that you might like to read an article about Marijke in a Christian newspaper. It gives some real insight into how life can be for a Mission Kid. This is how we know our Marijke and we are thankful for her honesty.

Today’s youth: Who is who? Today: Marijke Huisman (17) is from Bennekom. She just moved from Croatia to the Netherlands, is pursuing adult education in Ede, and likes to read books by C.S. Lewis.

Last summer, we lived temporarily in the vicarage in Randwijk, and a month ago, we moved to Bennekom. This is a handy place because I can cycle to Ede, where I go to secondary general adult education. Last year, I already had a few exam subjects completed; this year, I will take it further, and next year, I hope to have my diploma. In Croatia, I had already taken the English exam because we first planned to stay there longer. We left Croatia quite unexpectedly. It was March 2019 when it was decided. My sixteen-year-old sister wanted to go to do a practical study, which was not possible with distance education. In addition, my other sister, who is fourteen, wanted to go to a Dutch school too. I would rather have stayed in Croatia:

When we moved from Canada to here when I was ten, I didn’t have a good time. It was awful, actually. We had lived in Toronto, a very big city, and we ended up in the Netherlands in the middle of nowhere. At school, I experienced little understanding of our situation: my sisters were automatically classified one class lower because of their language deficiency, although they are very smart. I also found it strange that friends and family said to us, “How nice that you are back again.” To me, it didn’t feel like coming back, because I barely knew the Netherlands.

In Canada, we were as a family in the same boat; we were all aliens. But in the Netherlands, I felt lonely because my parents had a sense of having come home that I did not share.

Fortunately, the Netherlands is not that bad.

It’s nice to see our family again and to go to school. Mainly, people in adult education have failed in one subject and are in a few courses to retake their final exams. So, I follow more courses than most others, but I don’t mind. Further, it’s great that there is more choice here in everything. If I want to buy something, I can do that very easily, and the package will be delivered the next day. In Croatia, it took a few weeks.

And if I would like to find a hobby, I can literally do everything here. Because I am now going to school, I have less time for my biggest hobby: reading. I particularly like to read English literature. I also have read almost all of C.S. Lewis’s books. And the books of the apologist G. K. Chesterton. I also read fiction, but I prefer it contains something religious, like the books of Chaim Potok. I’m a real binge reader: once I’m working on a book, I can’t put it down.

In addition to reading, I like to embroider while listening to a book or turning on the BBC. For an older lady in Croatia, In Croatia, I made a small, very fine tapestry with an icon on it; that was a decent time-consuming activity. I keep in touch with her. I let her know what I am up to and what all happens. She has a lot of life experience and is a missionary herself, so she really understands me well.

I also talk a lot with my father, mainly about certain theological topics. We don’t talk about emotions. I am not such a type to talk about personal matters. I cry very quickly and prefer not to with my family because I see them every day. Perhaps it is as Anne Frank writes in her diary: that you are less likely to share your feelings with the people who live in your house. I’m very close with my two sisters. They are friends because they always came along on the many relocations. Moreover, we received a home education from a Dutch teacher together, while my brother went to a Croatian school. Next year, I will take one gap year to find out what I want to study. I would like to study abroad, but on the other hand, it is also relaxed to live at home.

I am not a practical type, and if you are one yourself, you have to be able to do many things yourself. My sister is much more practical. She cooks three times a week and can paint well. I don’t like cooking, why would I do it? I would prefer to follow three studies literature, history, and theology—but unfortunately, I have to choose. It seems nice to me to continue studying forever and becoming a professor. I just really enjoy school.” 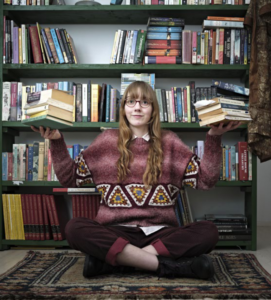 Thanks to the newspaper for the permission to post this here. The original link is here: https://www.nd.nl/leven/leven/946245/-als-ik-eenmaal-bezig-ben-in-een-boek-lees-ik-het-in-n-keer-uit