At the beginning of 2019, I bought an old wall decorator at the Antique market in Osijek. 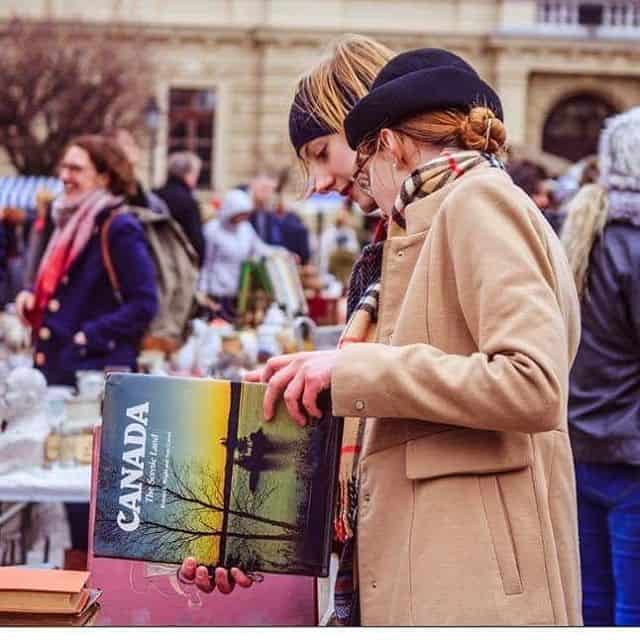 We wouldn’t miss out. Every first Saturday of the month, the square at the heart of the  Old Town Tvrda in Osijek is filled with curiosity objects. During the hot summer months, we would arrive early and be home before 10 to avoid the heat. During the mid winter cold, we would still be there, drinking German Gluhwein and eating warm, freshly baked bread or other sweet local treats. And we hung out with friends. We dressed a little bit up and were often wearing cute hats. Somebody spotted us in the local newspaper (picture above), and we found it funny. It did not matter what the weather was like. We were there, curious to find more curiosity in this wonderful place.

It was on one of these Saturday morning’s that we saw him laying there, among others. The wall decorator. There were plenty of choices, but I liked this one the best. I did not notice that he was a bit battered.  I just loved the pattern. Flowers and some structure. I think that this is the pattern of my life.

This wall decorator made me think of the wall decorations we had seen in the village of Backa Dobro Polje on one of our wanderings through the Vojvodina area on a search for the house of our friend’s Dorothee’ s ancestors. We found the house! But sadly I do not have a picture of the wall, although I can see it in my mind’s eye—white walls and blue, structured decoration. It was surely made with a decorator like this one. It is a very old fashioned way, what people used before they invented wallpaper. The house was battered on all sides, but within the house, we could see the wall decoration hinting at better times from the past.

If he could talk

What would that wall decorator have to tell us if he could speak? Would he talk about the walls that he made pretty in large houses in town? Or would he tell about the wardrobes in nice houses or boxes in hidden garages where he waited so many years for the day to be useful again?  Would he tell us how it hurt when he was forever damaged by a mouse? The wall decorator was probably waiting for better times.

Who knows how often he had lost hope

that he could do what he was made for:

bringing beauty and color in houses and the lives of human beings.

On the job again!

But alas, life has its turns. On that specific day, the owners changed. The roller lived again a restful life, waiting to be of good use for another year. He ended up in a different box—handled with care, though! How we loved him with an expectation from the beginning! He was my little treasure. We took him with us on our journey through Europe in the Summer of 2019—1600 kilometers—along with all our other belongings that made it after the reduction of our household. He was deep in a box, in a truck, during that long journey. But after that, he came out. And how joyful he was to be on the job again!

Q: Do you have an object with a nice story? (Yes to object, no to story? Just make it up, and feel free to share.)

Warm greetings, with a wink, Janneke