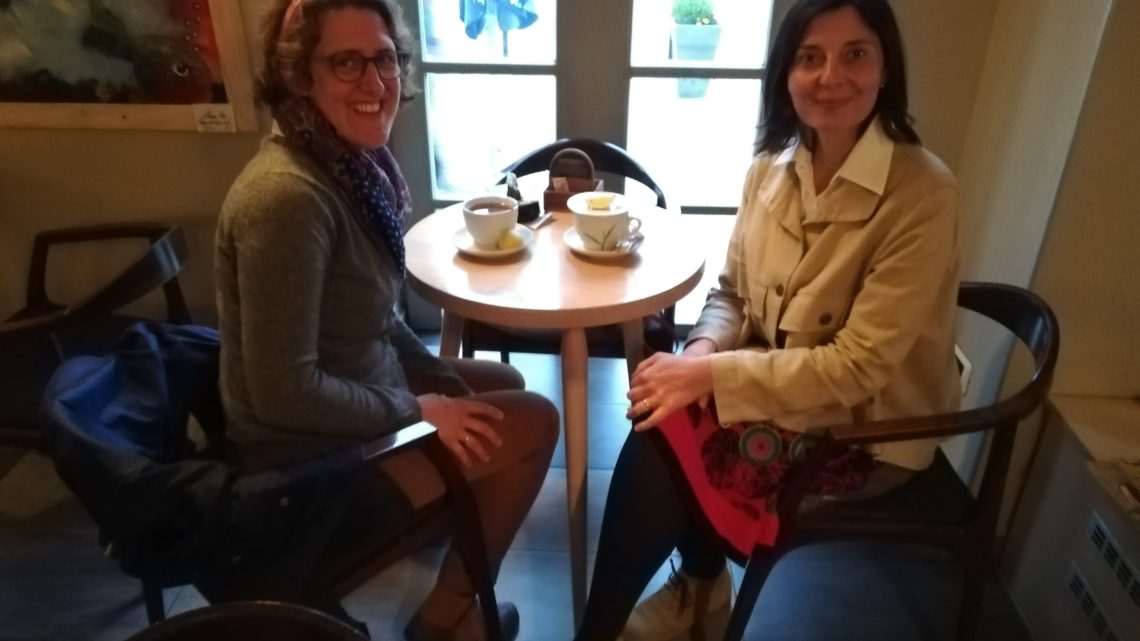 “I love the Church, if the Church or someone of the church is sick we have to treat it with extra care.” With these words, Marcela is acknowledging the weaknesses of the Catholic church. When I heard Marcela—a veterinarian, university teacher, author, and mother of seven children—say these surprising words, I thought, I would like to talk a bit further with her. So, we made an appointment after Mass on Ascension Day.

The mass was not over when I entered the large Osijek cathedral. It was full of people of all ages. The red light was on to indicate that the Holy Bread would be shared this evening. The congregation sang the litany. The organist plays and conducts the choir, which in turn leads the singing. It is a meditative way of singing that is constantly repeated. Just like in Hebrews 11, a cloud of witnesses is highlighted. I sense that we are not alone tonight. I breathe in peace and tranquillity as I move along with the believers of today in that ancient church.

Moments later, Marcela and I drink some tea in a little cafe in front of the church tower, and I ask her a few questions.

What was her life like under communism? “As a child, we could just go to church because my parents were not members of the Communist party. If you wanted a good job in the sixties and seventies, people became members of the party, and church attendance was over. “ The communist regime in Yugoslavia has always been a bit milder, than in other communist countries. But, that was not the case in the fifties; those were horrible years. “People regularly disappeared, and you would never hear of them again, priest, men, fathers, brothers. If you asked a question about it, you ran a great risk of being taken away as well.”

Marcela’s father was a small, independent butcher in a small Slavonian town. He was seen by the Communist party as a self-enriching capitalist. He remembers from his own childhood, that once an entire supply of home-made sausages, meat, and animals was taken. Protesting was impossible. Asking questions was too dangerous. This kind of experience has shaped the older generation: listening without asking questions. A cultural shift is taking place in the younger generation, but the generation gap caused by it is not always easy to deal with.

Marcela wants to build a bridge to women from other denominations. For a few months, she has met with a few other women from different churches—a progressive initiative in Osijek! The purpose of the evening is to talk, think, read, pray, sing, and share. But, the goal is ultimately to gain more understanding and recognition among Christians. It is wonderful to see how the women act with tact and receive the trust of the church leaders in return.

I recently attended such an evening. About twenty women were sitting together in a room of the neo-gothic Evangelical Lutheran Church. Marcela led the evening with a passage about Hagar, Sara, and Abraham. Two women and one man. They were forced to live together, whether they liked it or not. Marcela asked the group in the discussion, “When did you feel humiliated?” The women responded openly. A young Bosnian woman finally found her way in forgiveness after a lot of family injustice.

Natasha was also present, the singer from the Orthodox Church about whom I wrote last time. She told us something about her life as a Serbian girl in this Croatian city and refers to the article that I wrote a few weeks ago and with which she made it into the Dutch newspaper. She said, “You have no idea how encouraging this is for me, that my story is heard and my pain acknowledged.”

This is the heart of the city, is what I think while sitting in that circle. The concept is so simple: a room, a warm welcome, a safe setting, and a good question. The Word of God opens, prayer and singing make it complete. It is a training place for listening to each other.

Our tea is long gone, but we have much more to talk about. Marcela and I discuss our shared interest in the lives of Teresa of Avila and Mother Teresa. As we cycle back home, (two women, one bike;-) I wonder why I enjoy this kind of fellowship so much. Marcela is a woman who acknowledges weakness but has found her way to deal with it. She does it in a calm and practical way: Take care of each other, be faithful, and listen to each other. It is the most integrated and normal thing for her to take an example from wise people from the past. (Would singing the litany have anything to do with that?) In addition, she tactfully makes contact and talks with fellow Christians from other churches. She looks to what we have in common rather than what divides us. That seems to be the key.

These are ecumenical contacts, and that is oxygen for the soul.

This article was also published in the Dutch Newspaper

and is part of a series about people behind the religious map of Croatia.