How a beggar became a pastor’s wife

It was Summer 2013, and our family visited the little church in Darda for the first time. We met the Nicolić family: Đeno, Biljana, and their four children. Đeno led the service, and Julianna, our translator, whispered: “This is remarkable. He is here just for a few months now and had to overcome incredible fear. You have no idea about his background.” And, we did have no idea.

This is the story of Biljana and Đeno, excerpted from an article previously written by Melody J. Wachsmuth‘ in collaboration with Biljana Nikolic.

A story to be retold over and over again:

” Above all else, Biljana knew as a kid what it was to be unwanted and unloved. She never knew her father as he had abandoned them before her birth in Serbia. Her mother, a violent alcoholic, also left her at 3 months old with her grandmother. Occasionally, her mother came to stay with them, and she took out her own heartaches and rage on Biljana by beating her.

Biljana had always loved school, but even there, she felt different and rejected because she was Roma. Her schoolmates mocked her with taunts of “Gypsy, gypsy.”

Her uncle and aunt’s home, although extremely impoverished—nine kids crowded into a small sleeping space and eating around one pot with their hands—was the one place she felt safe. It was here she first encountered God while going to church with her cousins. Her aunt taught her a special song that she leaned on in her young life: “I have a phone that goes in the sky; when I have problems, I call Jesus.”

After learning about God, Biljana would often pray, even when her grandmother died and she returned to her mother. Because her mother was frequently drunk, Biljana became the acting mother for her two younger half-sisters. Her prayers further infuriated her mother, who would curse her and God and then beat her. Despite all this, Biljana remained resilient until one particular night that quenched her spirit. Her mother came home violently drunk, beat her, stripped off her clothes, and threw her out into the night. Consumed by fear and pain, Biljana made an internal resolution: “Naked, beaten and bloody, I was sitting in the dark and listening to the voices of my sisters who were crying and calling my name. Then, I was bitter toward God and said that I would never pray again. What kind of God is this?” After this, Biljana became an angry teenager who fought back and ran away, experimenting with alcohol and drugs to hide the pain and to impress her friends. “In the bottom of my heart,” she said, “I felt that I didn’t want to be like that, that this wasn’t me.”

At 14, Biljana fell in love with a 28-year-old Muslim. Her mother was not pleased and so decided to marry her to her friend’s nephew, 15-year-old Đeno.

So, with a 100 grams of coffee and a liter of brandy, her mother and Đeno’s aunt celebrated their agreement while she and Đeno remained unconvinced and resentful—in the first two months, they could barely meet each other’s eyes.

Biljana, 15 and pregnant, left Đenot and went back to her former friend. But, that was a short time, and she soon ended up on the street in the middle of a thunderstorm. Clutching her baby in her arms, despair and fear, she spoke to God once more:

“God, I know that you are here and that you gave me this child, but I don’t know what to do with him. If you want, take him.”

At that moment, the doors next to her opened, and a Serbian woman unexpectedly invited Biljana into her home. Đeno heard that she was on the street with his child, and he invited her back. Relieved, Biljana moved again to Vukovar, resolving to love her husband.

The situation, however, grew steadily worse: “He could never love me… he was bitter and hurt because his child had someone else’s last name. Although I gave birth to more of his children, my husband still beat me and insulted me.”

At times, they found temporary work or a room to stay. For the most part, however, they were homeless, living in parks, sleeping on benches, foraging through trash for food or something to sell, sometimes going without food for 2–3 days. Biljana would warm bottled water in the sun to give her children baths.

They survived NATO’s bombing of Serbia while sleeping in a park, the sounds and sensations bringing terror to their hearts.

They eventually decided to return to Croatia at the end of 1999, and Đeno spent 10 days in jail for his lack of documents. They continued living on the margins of society. Đeno would search through the garbage for scrap metal to sell, and Biljana would often beg on the streets. Sometimes, people would be kind to her, but other times, they would insult her. By this time, Biljana was so used to humiliation and rejection—from her father, mother, schoolmates, and husband—that it did not bother her. “I became a person without feelings,” she said.

In 2004, two Croatian women walked by and gave Biljana some money. One of the women proposed a deal in which she would give Biljana one Kuna every other time she saw her as long as she did not beg from her again. Eventually, the woman invited her to church, promising to give her something after the service. Although Biljana admits she only went to pick the items up, something unexpected happened to her: “When the worship started, something incredible woke up inside of me. I heard songs I had learned as a child in that small church, and I remembered every word…” She felt peace for the first time in years. She began to go to church with her children, and although Đeno mocked her for it, he did not oppose it.

One day, Biljana had a revelation: “I realized there was someone who forgives me for all the things that my husband couldn’t.  I felt that I was free and accepted. God accepts me the way I am. I felt love, which I never had before.”

Soon after, Biljana forgave her mom and her husband and was baptized in 2005. She began to earnestly pray for Đeno, and he noticed that she did not curse or fight back anymore. One night, while praying, she felt God promise: Believe, and you and your household will be saved (Acts 16:31). Things began to get a little easier for them—they received social help, so Biljana no longer had to beg, and Đeno stopped beating her.

Đeno became more open, and eventually, he accepted God’s love, repented of his rage, forgave Biljana, and was baptized in 2007. Biljana’s two sisters also converted, and she rejoiced that God had fulfilled his promise to her.

One day, Biljana went to a women’s conference in Belgrade, where she saw a Roma worship band leading the praise and worship. Shocked, she began to weep; it was the first time she had seen other Roma Christians. “‘Lord,” she prayed, “I want this in Croatia, too.” Biljana and Đeno already had a strong desire to serve their people, praying regularly for them, and now, Biljana sensed another promise from God: You and your household will serve the Lord (Joshua 24:15).

In 2010, Biljana, Đeno, and their Croatian church began fasting and praying for the Roma settlements around Darda, Croatia, where 1,000 Roma lived. With the encouragement of a Roma pastor from Serbia, they started visiting houses after an initial outreach concert. Biljana and Đeno began praying for a woman who had been sick in bed for four years. Everyone expected her to die—instead, the village was amazed when she was healed and returned to life. Till today, she is a faithfull member of the little church.

Biljana realized that God was beginning to fulfil his second promise to her.

After two years of visiting homes, however, Biljana and Đeno began to wonder if what they were doing was having an impact. “Sometimes, we came home and felt happy because we could see the change in people and that they wanted God, and sometimes, we would come home and cry because we were so disappointed,” she remembered. Filled with doubts and questions, they began to consider quitting their efforts in Darda.

One day, Đeno was out in the garden and suddenly felt God’s presence asking him to continue in Darda. After that, he rushed to tell Biljana, and together, they began to dream of having a church. Feeling suddenly joyful and full of hope, they began to plan and pray, wanting to finance the church themselves. When they were ready to share their vision, their church gave its blessing to them, and in October of 2012, they opened the church in Darda.

Reflecting on her ministry in Darda, Biljana sees that God uses her painful life story for his glory. She can understand and empathize with the people’s stories of poverty, abuse, alcoholism, early marriage, and constant rejection.

“Isn’t God the God of poor people, widows, and everyone who is rejected in this world?” she asks.

In September of 2015, she found that her life experiences gave her compassion and understanding not just for her own people but also for thousands of refugees flooding into Croatia. There were many intense moments serving thousands of traumatized people, but the children most impacted Biljana. When temperatures began to drop, children arrived wet and cold, and she would hold them while changing their clothes. Many times, she would find Islamic charms in their clothes, and she could sense the spiritual battle in the refugee camp. As she held them, she would also be praying over them: “I felt like whoever they were or whatever they believed, God loves them because they are people,” she explained. ¨ 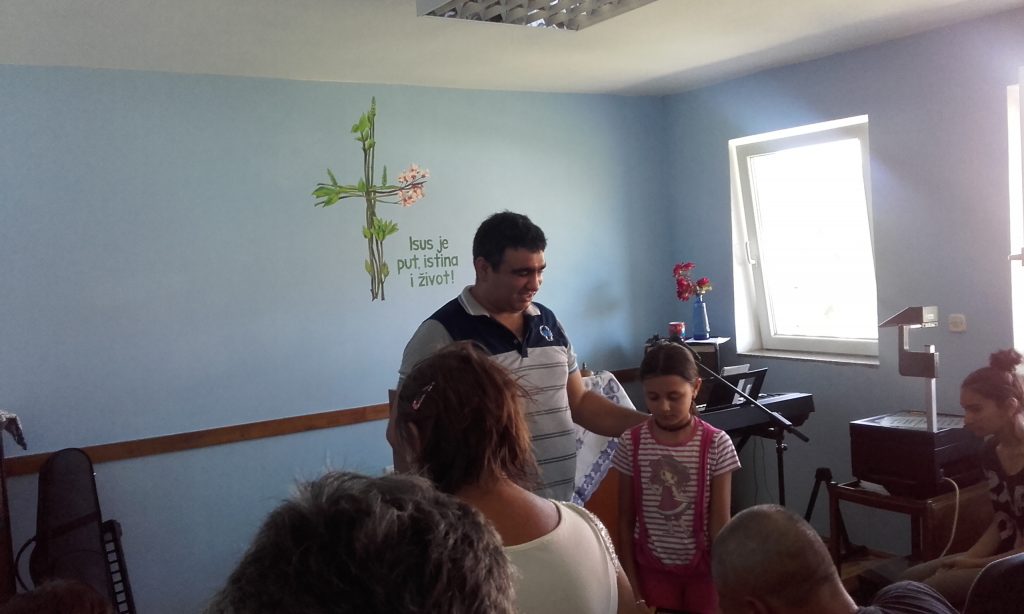 Now, the story is not over yet. But, if there is one couple that is aware of the need among their own people, it is Biljana and Đeno. And, it is impressive to see how powerful their ministry to the Roma is. Praise be to God!

Even youths will faint and be weary,
and the young will fall exhausted;
but those who wait for the Lord shall renew their strength,
they shall mount up with wings like eagles,
they shall run and not be weary,
they shall walk and not faint.

Đeno, Biljana, and their team are persistent and committed to the little church in Darda. It has been a real privilege to see how their desire is to serve the Lord, whether it has been with the refugees in the past years, Bible translation projects for the Roma, or faithful ministering in their own small Roma church. We see clearly God’s grace in how the church has become more mature over the years. May God bless them and many more Roma in the years ahead. May they feel the love that Biljana and Đeno now so freely share and that, by God’s grace, touched their hearts.

This article is part of a series about the people behind

I hope that you enjoy reading these articles as much as I enjoy doing the interviews.