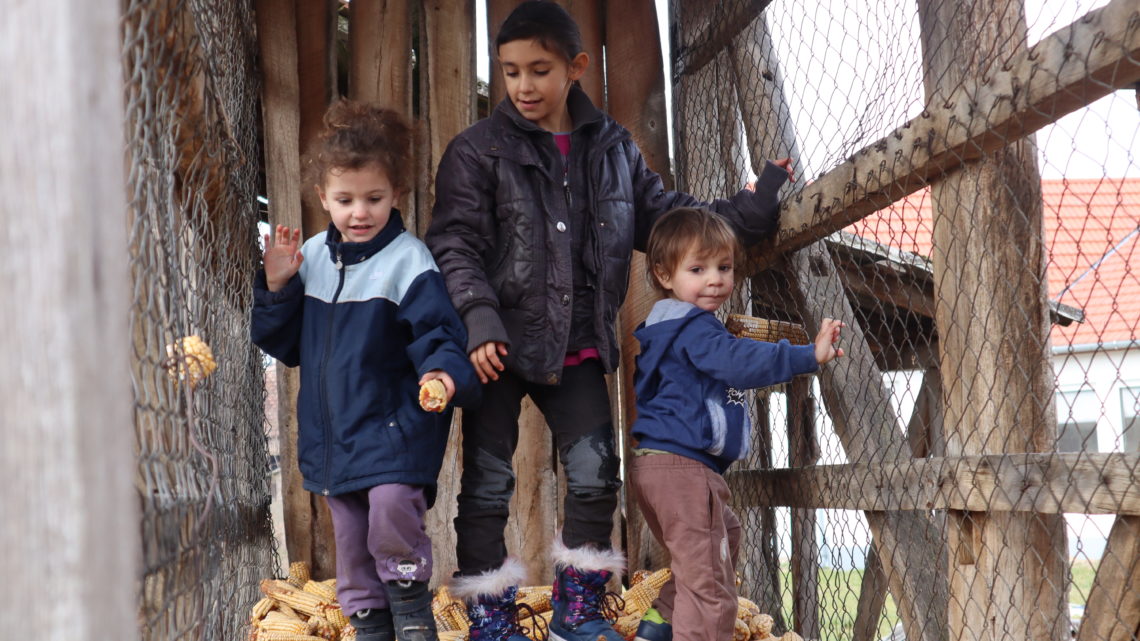 On the rocky road, a few passengers step by along with a goat, a few cats, and a few dogs. A child is walking a goat as you might usually see a kid walking a dog. The horse wagon is a useful way of transport for whatever needs transporting. The village of Darda is full of life, but polako—the Croatian word for slow, easy, not too fast.

It was only a few weeks ago that Jelle and I made a visit to Slobodan’s wood workshop in Darda, a village just fifteen kilometres outside of Osijek. Darda contains two large Roma settlements, each with about 500 people. Another twenty kilometres north is the southern part of Hungary, and 30 kilometres east is Serbia.

Around ten years ago, a small pentecostal church was started in Darda, and Djeno is leading the congregation with his team: His wife—Biljana—and a few others. In the last few years, we have watched the church mature, and it has been very special to see it happen.

Most of the visitors of the church are women and children. A handful of men are coming, but that seems to be all. Men are not only absent from church but also, often, from family life. Many are away, working in another country. Some have to stay a longer term in jail, often for stealing, which some consider a main way to support the family. Others have different perspectives on marriage—men that are not absent can cause problems due to alcohol, drugs, criminal behavior, or abuse in the home.

The question of the church in Darda was how to reach this group of men. The team thought about different options. After a while, a small farm in one of the Roma settlements went on sale. It is not a large farm but rather a basic building (see picture), 4 by 10 meters, split up into two rooms.

One of the rooms has a woodstove and a table. It is a place for fellowship. The other room is the workspace and has some machinery. The plan, which is very close to realisation, is to make products from wood that can be sold—cutting boards, tables, and chairs. Slobodan, our friend and colleague, is the head carpenter in this place.

When Slobodan is working in this space, sooner or later, somebody stops by for a little chat. This workspace is a place where young men can learn the craft of woodworking. It is also a place where, on a very small scale, an alternative economy finds its place: an economy of creative craftsmanship and honorable trade. In this way, it is an example of hope and new initiative in the heart of the Roma settlement.

As workers, we are not called to bring money only. It often makes communities passive and dependant on money from elsewhere. What we as workers can do, however, is to bring hope and a new future. We can encourage people like Slobodan to go on with his wood workshop as it can offer much potential in this Roma settlement. His own talents and capacity are also coming to light, and that is great.

Often, we are just catalysts, walking a bit alongside, encouraging, giving some advice, and encouraging people to take the next step. Ownership comes to the surface, and self-worth grows.

A place of Hope

It would be great for this place to grow into a place where Slobodan is able to fund his own family life. At the same time, it is a place for apprenticeship for the local men from the village, who can practise their skills and learn a new trade.

Everyone who is able to build their own future—with the help of God—develops a sense of ownership and self-worth, appropriate pride towards what they have achieved. But  not everyone has the same opportunity, and that is why Slobodan has this workspace.

The woodworker from Nazareth

There is something that he learned from a woodworker who lived and worked 2000 years ago in Nazareth. It is not something that can be done with a saw or a hammer but rather a deep sense that God is full of grace, that there is always room for a second chance—that God is never a God who says, ‘Your life is too messy.’ Slobodan knows that himself as he is a former drug addict. God is using his past to give a hand to the people around him.

When we make a mess in life, we can make another start. God does not throw us out like a piece of rubbish. He gives us another chance. He shapes, cuts, and works on us until we are a beautiful part of the whole that He created with his very own hands.

Slobodan, who became a dad, last summer, shares his story with the men in the village. When they find hope and a future, they will pass this on to their wives and children. At the very least, they will have a chair or a table. With God’s grace, they will also learn something from the secret called love.

This article is posted as a column in a Dutch newspaper, Juli 16th, 2019

It is the last part of the series about the people behind the religious map of Croatia.

I hope that you enjoy reading about these stories, as much as I do the interviews and the writing!

Feel free to respond and let me know what you think.